The Northern Lights are one of the main attractions the Lofoten Islands has to offer and it’s fair to say they’re among the most spectacular natural phenomena our planet has to offer.

Few things beat the feeling of standing beneath an explosion of colors elegantly dancing across the sky. It’s an experience you’ll never forget.

Northern Norway, and in particular the Lofoten Islands, is the perfect place to witness the Aurora Borealis. The experience becomes even more spectacular when you’re surrounded by jagged peaks or pristine arctic beaches.

There are, however, a few factors you need to be aware of in order to get the best experience; the lights aren’t always visible and sometimes you need to be certain areas to get a better view of them.

What are the Northern Lights?

The Northern Lights, also known as the Aurora Borealis or ‘Lady in Green’, is a natural phenomenon that’s visible on the night sky in the northern hemisphere. They are caused by electrically charged particles from the sun that enter earth’s atmosphere and can be seen in a variety of different colors.

Green and pink are the two most common colors but it can also be seen in various shades of red, blue, yellow and violet. It’s the altitude of the Northern Lights that determine the color we see.

Unlike common belief, the Northern Lights aren’t always visible throughout all of Norway. It’s only on nights with high activity that they can be seen in the southern parts of the country, this is typically only a few nights a season.

In Northern Norway, however, they are visible at a much lower activity, making the likelihood of seeing them a lot higher. In fact, the further north you are, the lower the intensity needs to for you to see them.

The Lofoten Islands are perfectly located for viewing the Northern Lights. With a latitude of 62 degrees north, it’s far enough north for them to be visible even when there’s a very low activity. What makes it even more special is that you’re surrounded by some of the most incredible landscapes our planet has to offer.

When can I see the Northern Lights in Lofoten?

Technically, the Northern Lights can be active at any time of the day but they’re only visible on a dark sky.

This means that the Northern Lights aren’t visible in the Lofoten Islands during summer, as this is the time of the midnight sun, a period of two months where the sun doesn’t set below the horizon.

The nights begin to get darker in September, which marks the beginning of the Aurora season, that lasts until mid-April.

Viewing the Northern Lights in September can be more comfortable as the temperatures are still relatively high but the winter months have a higher likelihood of seeing them. This is due to the early sunsets and long nights (especially during the Polar Day period when the sun doesn’t rise above the horizon).

Keep in mind that the sky needs to be clear in order to see this phenomenon so keep an eye on the forecast. Rainy or snowy nights are no good for Aurora.

It might be cold to stand outside waiting for the Northern Lights to appear in the winter months but it’s worth it once the show begins (and it feels extra good to come back to a warm and comfortable cabin afterwards!)

Where are the Best Places to See the Northern Lights in Lofoten?

First of all, there are no bad places to see the Northern Lights in the Lofoten Islands. The excitement is real no matter where you first spot them. There are, however, a few guidelines to follow in order to get the best possible experience.

The first step is to find a place with minimal light pollution. This is typically by one of the many scenic beaches, somewhere in the mountains, safely off the road outside the towns or with the lights turned off at your cabin.

Since the Northern Lights normally are most active in the north or northwest, it’s a good idea to find a location that’s faced that direction. Note that its direction can change when the activity is extremely high and it’s not uncommon to see them dance straight above your head.

The picturesque Uttakleiv beach is one of the best places to watch the Northern Lights in Lofoten. Here you have a clear view to the horizon and beautiful mountains around you, giving you plenty of photographic opportunities as well.

A benefit of this beach is that you can sit inside your warmed-up car while waiting for the activity to pick up. The view from the parking lot is as beautiful as from down below on the beach. Here you got a good visibility, so, if the Northern Lights are out, this is a good place to be.

Located directly before the tunnel to the previously mention Uttakleiv Beach, the Haukland beach is just as idyllic to visit. With its crystal-clear water, it looks like a tropical scene during daytime (just ignore the freezing temperatures!) During night, it’s just as magical as the Northern Lights dances above you.

The direction of the beach and the fact that the horizon is concealed by Mount Mannen, this is not an ideal spot when the Aurora activity is low. When the Aurora is active, however, it’s one of the most beautiful places to visit. It’s a big sand beach with lots of space for yourself.

The Skagsanden Beach in Flaktsad has become one of the most popular places for Northern Lights photographers to visit. The long beach is home for beautiful reflections and interesting sand patterns that can create stunning images.

Here you can also enjoy the comfort of your car as the view is just as good from the parking lot. If it’s a nice night or you’re brave enough to dare the cold weather, a walk along the beach as the Aurora dances above you is highly recommended.

This beach also has two public toilets that are open year around.

Unstad is perhaps most known for being a surfer’s Arctic paradise and hosting the northernmost surf shop in the world but it’s also one of the greatest spots to view the Northern Lights in Lofoten.

Here you can take a stroll along the beach, sit in the comfort of your car or hike up one of the nearby mountains. The views are outstanding and with a clear view to the horizon, it’s a perfect spot to chase the Aurora.

The previous suggestions have featured some of the most scenic beaches to view the Aurora in Lofoten but hiking a mountain is going to give just as spectacular views. It’s also quite likely that there won’t be anyone else there.

There is an abundance of mountains in the region and any of them with a decent view towards the north is a good option for a night under the Northern Lights. Make sure to pay attention to the local weather forecasts to avoid any uncomfortable situations in the mountains.

How do I Photograph the Northern Lights?

Experiencing the Northern Lights is an unforgettable moment so why not capture it with a photo as well? With a little bit of preparation and basic knowledge of your camera, it’s not that difficult either!

It is possible to photograph the aurora with certain smartphones but the best images are taken with a camera with the possibility to manually adjust the ISO, Shutter Speed and Aperture.

You’ll also need a tripod to mount your camera on, as night photography requires the use of a slow shutter speed. Doing this handheld is not going to result in good quality images.

When you’ve mounted the camera on a tripod and found a composition you like, it’s time to adjust the camera settings. The best settings for night photography are often a good starting point and are as follows:

Keep in mind that the Northern Lights can be quite bright when dancing quickly across the sky. If this is the situation, use a quicker shutter speed to freeze its motion. A too slow shutter speed will result in the Aurora being blurry and ultimately overexposed. Please take a look at this article for perfecting your night photography

Coming home with a good photograph might sound enticing but don’t forget to take a moment and enjoy the experience without looking through a viewfinder.

The author of this article, Christian Hoiberg is a freelance photoguide at Hattvika Lodge and is available for northern lights missions on request. Christian is also running Capture Landscapes website. For more information about how to grab a capture – visit his website. 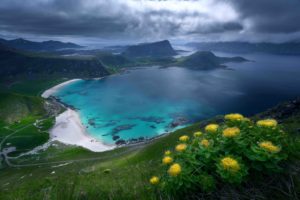 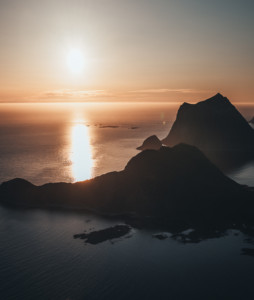